The Monte San Martino charity is a permanent reminder of the great courage, generosity and humanity shown by the Italian people in aiding escaped prisoners of war and political and racial refugees from 1943-45. Its name is taken from a village in le Marche, the north Italian region – one of the many regions containing the camps that held the 80,000 Allied prisoners who had been captured during campaigns in the Mediterranean and North Africa in the Second World War.
The International Red Cross reported that there were 52 main camps in Italy, served by 18 hospitals, and a number of work camps. Despite the transfer of many prisoners to Germany at the Italian Armistice on 8th September 1943, up to 50,000 men set out to reach freedom: north to Switzerland or hundreds of miles south towards the Allied troops. 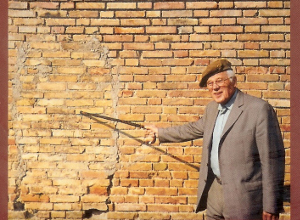 Italian citizens – among them many contadini (country people) – gave the escaping men food, clothing and shelter and guided them through the lines to safety. They did so often in spite of their poverty and at great personal risk: many paid the ultimate price and were shot or had their houses burnt down. In addition to awarding one-month language study bursaries to young Italians in England during the summer, the Trust supports various Freedom Trails within Italy to commemorate the sacrifices made by their Italian hosts and which retrace the routes taken by escaping prisoners of war.

Keith Killby, the Trust’s Founder, escaped through a hole in the war from Servigliano camp in le Marche. The first local inhabitant to help him was Maria Levi, who waded barefoot across a river to him, bearing a pot of pasta on her head. Keith named the Trust after nearby Monte San Martino.